Is it Real or is it Fiction? Raven’s Redemption

Is it Real or is it Fiction. Raven’s Redemption

My tag line is “Thrillers are fiction … until it happens.” It keeps happening.

I thought you knew…. 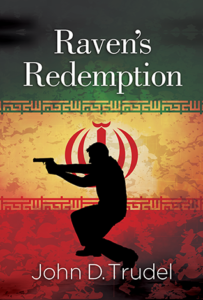 The back cover of Raven’s Redemption features an endorsement from General Paul Vallely. I’ve known him for some time, but only got to meet in person and chat over lunch recently. Paul runs “Stand Up America” and is respected as being an expert in Geopolitics and Military Strategy.

Near the end of our discussions, he pulled out his cell phone and gave me a glimpse of a video of a container ship. One of the container lids tilted and up came a missile launcher. Paul named it, a Russian IRBM. Off it went.

The video ended, but the next frame in my mind was the footprint of a single high-altitude EMP burst taking out electronics from New York to Washington DC and beyond.

All Paul said to me was, “There it is.” He put the phone in his pocket and we both left.

Kill radius of one EMP blast

This is the plot line of Raven’s Run, which predicted the Iran Deal.

There are tens of thousands of container ship visits to East Coast ports every year, but few if any by icebreakers.

I kept thinking of Paul’s video. It was scary realistic. I finally contacted him to ask where he got it. He sounded surprised. His answer: “Club K System built by the Russians and sold to Iran two years ago. Google it for pictures and videos.” 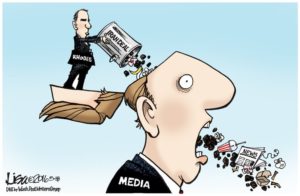 Why is it not treason for the White House spokesman to knowingly lie to the public to give aid and comfort to a deadly enemy? Where is Fox News when you need them? Link.

Note: The Russian missile systems sold to Iran seem to be configured as “Carrier Killers” and for tactical use against land targets. Now that the Iran Deal gives $150 Billion in funding , nukes, and delivery systems, can IRBMs with nuclear warheads be far behind?

Raven’s Redemption has my characters trying to move more distant from politically-correct, rules-bound bureaucracies. Here’s why.

The more my novels touch reality, the more aware I have become that NEITHER PARTY has handled the rise of radical Islam competently. The Cold War ended and the Wall came down in 1990.

Many in the West heaved a deep sigh of relief. One popular book proclaimed “The End of History.” It would take time, but it was now inevitable that history would progress to its natural conclusion, a peaceful coalition of liberal democracies. That belief vanished on the morning of 9/11/2001.

Our military responded splendidly, but what would have been glorious victory in another era was the prelude to endless nightmares as civilian leadership tried vainly to build liberal democracy in lands that wanted no part of it.

Note: See the recent book “There Will be War: Volume X,” by Dr. Jerry Pournelle for more. Jerry is an amazing person, a top-selling SF Writer, and one of the key figures behind the Reagan Era “Star Wars” programs that actually did end the Cold War. I’m proud to call him “friend.”

The fact remains that America’s approaches to stop jihad [conventional war on one hand, ignoring it on the other] have failed. Failure may be an option for political strategy, but it is NOT for national security or good thriller novels.

In my novel Raven’s Redemption I look back to things that have actually worked to stop jihad. I weave the legend and history of Blackjack Pershing into my book.

Pre-World War one, the United States was having severe problems with the violent Muslim jihadists, the Moros, in the Philippines.  The term “run amok” comes from the Moros. The Spaniards tried for 300 years but could not conquer them.

Moros were fierce warriors who sought death in battle. They would bind up their limbs so they wouldn’t bleed out and attack with machetes.  The weapons of the day, revolvers and bolt action rifles, could not stop them before they hacked you severely.

That forgotten war changed our history in several ways. For one, the 1911 Model Colt .45 was developed, perhaps the most successful military pistol in history. The .45 ACP round would put down even a charging Moro.  [Ironically, at this writing, some in Congress want to force our military to standardize on the less powerful 9 MM pistols used by NATO.] 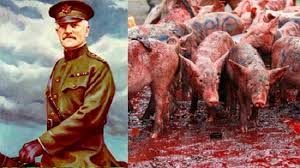 Part of the Blackjack legend involves pig’s blood and shooting prisoners. My putting this into Raven’s Redemption has upset some people. They rage that this is a lie, that it never happened. What has been accepted as truth (His 836-page memoir won the 1932 Pulitzer Prize for History) for a century is being erased.

General Pershing wrote in his autobiography that, “These Juramentado [Moro] attacks were materially reduced in number by a practice that the Mohamedans held in abhorrence. The bodies were publicly buried in the same grave with a dead pig. It was not pleasant to have to take such measures, but the prospect of going to hell instead of heaven sometimes deterred the would-be assassins.”

Snopes declares the Blackjack legend false. {Snopes spoof. Snopes fact.} Donald Trump was fiercely attacked as a 2016 Presidential Candidate for daring to even mention it. But the truth is that NO ONE knows.

There is no proof that it did happen and no proof that it did NOT happen.  What is known is that Blackjack Pershing was 1) the only man in history to get a field promotion from Captain to General [by President Teddy Roosevelt], and 2) whatever he did solved the jihad problem for 42 years. Link. Link.

Truth in Fiction vs. Lies in Reality

Author Stephen King says his horrific character Randall Flagg (featured in at least 9 novels) is “somebody who’s very charismatic, laughs a lot, is attractive to men and women both, and appeals to the worst in human nature…” King says Flagg brings the same basic message: “I know all the things you want and I can give them to you, and all you have to do is give me your soul.”

The popular TV series House of Cards features a dark, amoral pairing of ruthless characters (President Francis Underwood and his wife Claire) who betray and destroy all around them to seize power.

Does this fiction remind you of any actual people elected to high office? Me too. That’s scary….

What or who do Americans trust these days? Recent polls say:

“America in its decisions seems to always look through a political prism rather than a reality prism.”

My conclusion: Orwell was right. In these times, there well may be much more truth reported in fiction than there is in the news. For some time now his novel 1984 has been near the top of best selling lists.  It’s not just me…. 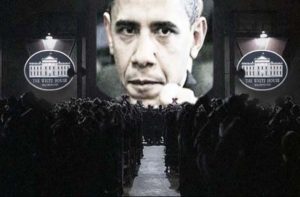 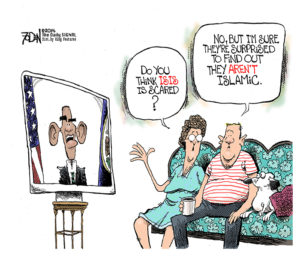 ISIS is not Islamic

Psychosis is a serious mental disorder characterized by thinking and emotions that are so impaired that the person experiencing them has lost contact with reality. Thus it is that many Americans worry more about Global Warming than radical Islam, more about gay rights than mad mullahs with nuclear weapons and delivery systems, and agree that “ISIS is not Islamic.”

My Raven’s series has proven popular with readers.  Mine are the only Thrillers to have ever won major Paranormal Awards.

“It is Raven and Josie who are at the heart of this story and who form one of the most interesting romantic pairings in the thriller genre. Raven is a trained killer but also a patriot, a man on the order of the late Vince Flynn’s character Mitch Rapp who will stop at nothing to destroy those he sees as a threat to his friends and country. In contrast, Josie abhors violence and is even physically and psychically sickened by it. Even guns disturb her. Josie’s contribution to the team is as a remote viewer, a person who can through extra sensory perception sense people, objects, and, in Josie’s case, future events from a great distance. Somehow the two manage to discover common ground, to blend darkness and light into a unique union in their relationship.”

With that said, most of my readers view the paranormal aspects of this relationship to be, ah, fanciful. Most smile and shake their heads, though a few have told me interesting stories of their own. Then along came reality on January 20, 2017.

Just before President Trump was inaugurated, the CIA declassified some 13 million pages of documents, including at least 160,482 documents which involved remote viewing.  Today many consider global warming to be “real” (which it is – as is global cooling) and scary, but most think paranormal research to be, well, tin hat stuff.

The general reaction was ridicule and comments about stupid, wasteful government. Here is a sample:

I certainly won’t dispute that. Governments are often wasteful. More to the point, see the disclaimer in the front of any of my novels. I write fiction to entertain. I make up stories.

It is interesting that these CIA records span so many different administrations, both parties, and a time frame of 1941 to 2014. Activity was highest during the intense days of the Cold War, after Sputnik and the Cuban Missile Crisis.

Now declassified documents capture the incident of the Typhoon Russian ballistic missile submarine discussed in my fiction on about page 141 of Raven’s Run.

You can search these records for free at the link below. Enjoy! Josie lives!!!

WAS ANDREW BREITBART MURDERED BY POISON MUSHROOMS AS IN MY NOVEL?

There is a mystery about the death of Andrew Breitbart, an exceptional American. On the night of March 1, 2012, Breitbart collapsed suddenly while walking in Brentwood. He was rushed to Ronald Reagan UCLA Medical Center, where he was pronounced dead just after midnight.[45][46] He was 43 years old.

There has long been speculation that Breitbart was murdered. Now some are saying it was perhaps by use of the same methods as are detailed in my novel. Link1. Link2. Link3. Link4.

This news snippet came up on the Internet in September 2018:

“Andrew was probably murdered by Bill Ayers, who invited him to a dinner at Ayers’ house. About two weeks later, at a CPAC, Caroline Glick noticed he appeared ill. Probably from mushroom poisoning.”

5 Responses to Is it Real or is it Fiction? Raven’s Redemption