ONE OF THE MOST ENCOURAGING EMAILS

Justice Neil Gorsuch has only been on the Supreme Court for a short while.

Recently he ignited the fire of liberty and broke 40 years of precedent when he refused to join the SCOTUS “cert pool.”

The cert pool was established in 1973 during the early days of the Burger Court, in order to efficiently review the near 8,000 petitions
received each term.

In practice, the petitions are apportioned among the Court’s law clerks, who then circulate a memo to the justices recommending a grant or denial. The obvious problem here is that this gives the power in these 8000 cases to the law clerks instead of the Justices. It also, in theory, allows 3rd parties to unfairly influence a case through the clerks.

This is the kind of story everyone should be hearing or reading in the media, but obviously is not.

—————————— ——————————
Today the United States Supreme Court issued a direct and final blow to the Islamic Indoctrination of the young in this nation.

The full panel of the United States Supreme Court which consists of 9 judges who met to decide the fate of Islamic indoctrination in our American public schools. In a typical 5 X 4 decision, common sense won out, and we have sanity restored to our schools once again.

The United States Supreme Court was able to hand out this decision banning Sharia Law and Islam from being taught in classrooms because of the tie-breaking vote of the newly appointed Supreme Court Justice Neil Gorsuch. Link.

Gorsuch went on to write about the decision:

“The government certainly has no business being involved in religion, but this isn’t a government issue or a religious issue. This is about the judicial branch interpreting the laws as they apply to the teaching of religion. We shouldn’t be teaching any religions in the
public schools of this country.”

Liberals are all about teaching Islam and Sharia Law but they have issues with “Under God” in the pledge of allegiance and “In God We Trust” on our currency.

This should have been a unanimous decision, not 5 to 4, but it seems like the 4 liberal judges on the Supreme Court don’t care about the constitution, nor our values.

Perhaps this is the start of restoring America to its founding glory.

Note: If you try to research this, you will run into a barrage of #Fake fact-checks from the likes of Snopes, etc.  They claim that the Supreme court never ruled and Gorsuch did not issue a ruling.

That is true, but totally misleading: Alinsky 101. This case was about monuments, about having the Ten Commandments posted in a court room. A Circuit court had ruled that they were allowed. Muslims and others petitioned SOCUS to overrule.

Oct 16 2017  “Petition DENIED. Justice Gorsuch took no part in the consideration or decision of this petition.” SIMPLY BY BEING THERE TO VOTE HE SAVED OUR CHRISTIAN HERITAGE.

Judicial activism, as we are seeing it repeatedly displayed in our courts is destroying the judiciary and will ultimately weaken the role of the judicial branch in the eyes of the people. The only power that courts have is the trust of the people that judges will act fairly and put aside personal bias.

Today, Democrat senators are working to stop President Trump’s judicial nominees because these nominees are counter to the left-leaning judges with whom President Obama packed the courts over eight years.

As reported by The Stream:

“Sen. Charles Schumer (D-NY) gloated in 2014, ‘one of the most profound changes this Congress made was filling the bench’ with Obama’s appointments of federal judges. This will affect America for a generation…’

President Obama himself gloated, ‘I am — not to brag — but I have transformed the federal courts…’

Nine of the 13 U.S. Courts of Appeals have more judges appointed by Democrats than by Republicans.

The United States Court of Appeals for the D.C. Circuit (informally considered the 13th circuit) is considered the second most powerful court in the country, after the Supreme Court. It hears cases involving the federal government. Obama changed the composition to a 7-4 split in favor of Democratic appointees.

Obama got 329 federal judges appointed to the circuit and district courts, all lifetime appointments. The Daily Signal characterizes the change in composition of the courts as a revolution that has been ‘comprehensive, dramatic, and under the radar.'”
Liberty Counsel Action is committed to the restoration of the judicial branch of government.

John, it is vital to our nation to have jurists in our courts who will uphold the Constitution and base their decisions according to the rule of law, not on a liberal ideology and a “fluid Constitution” as do many of President Obama’s appointed judges.

It is wrong for Senate Democrats to ignore constitutional precepts and abuse Senate rules to stall nominations in order to further impose a godless orthodoxy in Washington and in our courts of law.

It is imperative that the Senate push through President Trump’s nominees.

NOTE: It is not just the Senate Democrats who are frantically blocking voting to stall Trump’s appointments (aided and abetted by some Republican Party Swamp Creatures, e.g. McCain), it is also the American Bar Association.

“Since when did the Senate accept the idea that its  members should outsource to a third party their constitutional responsibility to evaluate the fitness of the president’s nominees to the federal bench?” Since Obama, apparently…..

The ABA Jumps the Shark. Link.

Now the Scary News (you will not see this in the Fake News Media) Link.

“The Enemy Among Us”

I do not understand how living in a country with its democracy established over 200 years ago, and now, for the first time in history, suddenly we have one of our former presidents set up a group called “Organizing for Action” (OFA).

OFA is 30,000+ strong and working to disrupt everything that our current president’s administration is trying to do. This organization goes against our Democracy, and it is an operation that will destroy our way of governing. It goes against our Constitution, our laws, and the processes established over 200 years ago. If it is allowed to proceed then we will be living in chaos very much like third world countries are run. What good is it to have an established government if it is not going to be respected and allowed to follow our laws?

If you had an army some 30,000 strong and a court system stacked over the decades with judges who would allow you to break the laws, how much damage could you do to a country? We are about to find out in America!

[This is the executive branch of Obama’s shadow government. Violent action groups include Antifa, BLM, etc.]

Our ex-president said he was going to stay involved through community organizing and speak out on the issues and that appears to be one post-administration promise he intends to keep. He has moved many of his administration’s top dogs over to Organizing for Action.

OFA is behind the strategic and tactical implementation of the resistance to the Trump Administration that we are seeing across America, and politically active courts are providing the leverage for this revolution.

OFA members were propped up by the ex-president’s message from the shadows: “Organizing is the building block of everything great we have accomplished Organizers around the country are fighting for change in their communities and OFA is one of the groups on the front lines. Commit to this work in 2017 and beyond.”

OFA’s website says it obtained its “digital” assets from the ex-president’s re-election effort and that he inspired the movement. In short, it is the shadow government organization aimed at resisting and tearing down the Constitutional Republic we know as AMERICA.

Paul Sperry, writing for the New York Post, says, “The OFA will fight President Donald Trump at every turn of his presidency and the ex-president will command them from a bunker less than two miles from the White House.”

Sperry writes that, “The ex-president is setting up a shadow government to sabotage the Trump administration through a network of non-profits led by OFA, which is growing its war chest (more than $40 million) and has some 250 offices nationwide. The OFA IRS filings, according to Sperry, indicate that the OFA has 32,525 (and growing) volunteers nationwide. The ex-president and his wife will oversee the operation from their home/ office in Washington DC.

Think about how this works.. For example: Trump issues an immigration executive order; the OFA signals for protests and statements from pro-immigrant groups; the ACLU lawyers file lawsuits in jurisdictions where activist judges obstruct the laws; volunteers are called to protest at airports and Congressional town hall meetings; the leftist media springs to action in support of these activities; the twitter sphere lights up with social media; and violence follows. All of this happens from the ex-president’s signal that he is heartened by the protests.

If Barack Obama did not do enough to destroy this country in the 8 years he was in office, it appears his future plans are to destroy the foundation on which this country has operated on for the last 241 years.

If this does not scare you, then we are in worse trouble than you know.

So, do your part. You have read it, so at least pass this on so others will know what we are up against. We are losing our country and we are so compliant. We are becoming a “PERFECT TARGET” for our enemy! 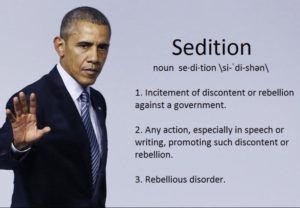 I am being asked if these “Shadow Government” acts on the part of Obama violate any laws. Words like “Sedition” and “Treason” are used.

Polls indicate that many people think Obama’s actions violate the Logan Act. I expect that he could be prosecuted, given a will to act on the part of Congress.

2 Responses to Perhaps the GREATEST danger — the courts. Good news and troubling truth…..