Who is Antifa? What you need to know. 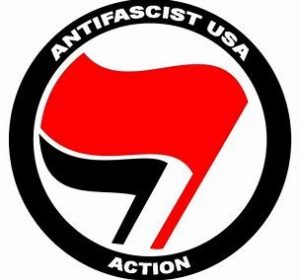 Antifaschistische Aktion, abbreviated as Antifa or anti-fascist, was an organization affiliated with the Communist Party of Germany that existed from 1932 to 1933. In the postwar era the historical organization inspired new groups and networks, known as the wider Antifa movement, many of which use the aesthetics of the historical Antifaschistische Aktion, especially a modified version of its logo. Wiki

There is much confusion as to who Antifa is, and what they stand for. First, let’s define fascism that they say they are against: Fascism is a set of political beliefs that includes strong control of society and the economy by the state, and the halting of any resistance. In a fascist nation, private enterprise would continue, but all private commercial endeavors would be heavily controlled by the state. Examples would be Nazi Germany and Mussolini’s Italy.

In a Communist society, all means of production would be owned and controlled by the state. Communism is theoretically classless and egalitarian. In reality, the ruling class always does very well. Examples would be the former Soviet Union, Communist China, Cuba, Vietnam, Laos and North Korea. All have had to introduce some form of capitalism to survive, some more than others. There are no pure Marxist systems in existence today. It simply does not work.

Hitler expelled the Communists from Germany in the early thirties as they were stealing his thunder and his voice. The Fuhrer was very impressed with Mussolini’s fascism and how effective it was, hence the fascist/Nazi alignment during World War II. These deported German Communists hit the U.S. college circuit, joining every major university, until they have now almost completely taken over our education system.

Fascism and Communism are not opposite ends of the spectrum, rather, they are first cousins on the left. Both are secular socialist with power being absolute with no opposition tolerated, especially from God. No natural rights, only that which they choose to dispense.

On Monday, a disenchanted former Antifa member was interviewed on Fox News. He was as confused as so many others. He called Antifa the real fascists. No, they are not fascists.

They use the moniker ‘anti-fascist’ to keep you confused with no idea as to their real intentions. Democrats don’t speak out because they are close relations…the militant wing of the party doing the dirty work, but keeping enough space between them to distract you. Democrats are not strangers to militant wings, hence the KKK.

They both have all the earmarks of beginning as organized crime. If someone wants free stuff from the government, they vote or support those that promise it. The money is taken from those that do work (oppressors) and gives it to those who won’t work (the oppressed). It’s a social & political contract. Give me power, I give you free stuff and will protect your receivership. Of course, if you give them enough power you will eventually no longer have a vote or a choice in the matter or even the free stuff.

Democrats love to promise what they know is impossible just to sit back and watch the Republicans say no, and then with expressions of righteous indignation explain in a press conference that Republicans just don’t care. Republicans fall for it every time.

Antifa are people that have been indoctrinated that America is an illegitimate country, built on the backs of slaves, racist to its very core where common citizens, especially those of color, have no chance at a decent life. They have been stirred up to a point of hate. They are either ignorant of history or just lying to themselves.

To Antifa, anyone that disagrees with them, is not entitled to free speech. Heck, anyone who disagrees with Democrats is labeled a racist, homophobe, whatever. They both see themselves as the arbiters of morality even while they are assaulting people and killing babies. Conservatives are not fascist. If there are fascists in this country, they will reside in the Democrat Party. What group of politicians works the hardest to control every aspect of commerce and limit freedoms? 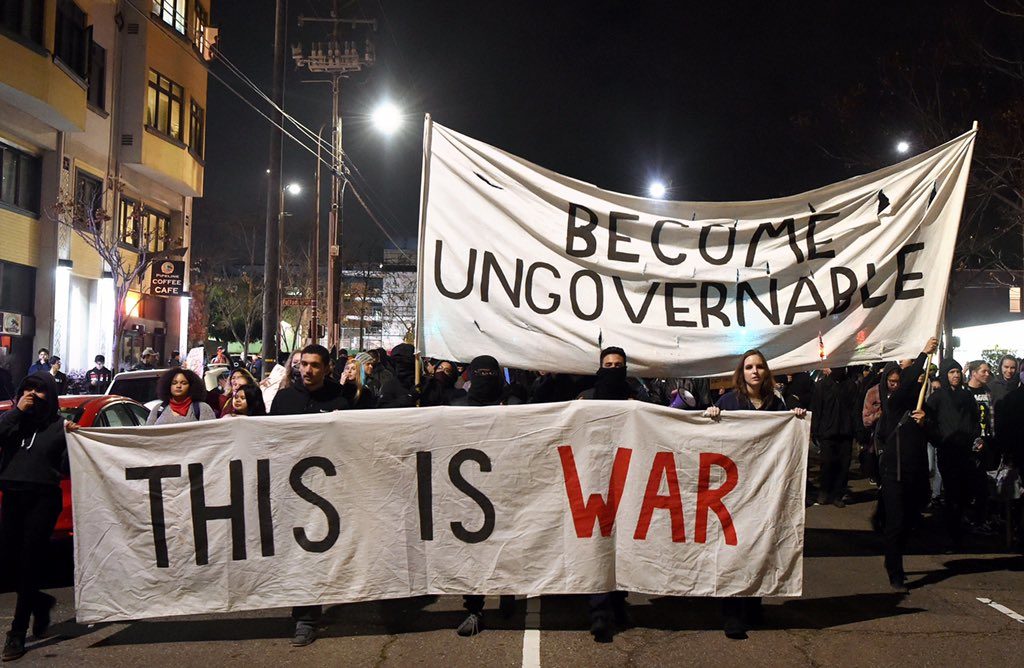 If a group is going to seize power or arrange a civil war, you need a reason and that always points to a class of people, a faction, an enemy. And the Left is busy creating just that…an enemy they need to destroy in order to achieve their ends. You know, the middle class ‘racists’, ‘white supremacists’, ‘deplorables’, conservatives…all the people that are representative of the people that built this country. That would be everyone that isn’t a socialist, whatever the race. Hitler and Stalin would be proud.

The immediate goal of Antifa and the Left is to create chaos with anarchy close behind. The Antifa website, itsgoingdown.org admits that Antifa members are either Marxists, Maoists or anarchists. They urge their followers to make the country ungovernable and to participate in mass insurrection and physical violence….anarchy.

Why does the Left ignore Antifa? Why do they demand that prison populations be reduced? Why is the rule of law being assaulted? If violent demonstrations and mass shootings continue…the people will demand a heavy-handed response from the government…especially gun confiscation, making the country ripe for takeover. I am not convinced that the mass shootings as of late are totally unrelated. They seem to fit the intention nicely. Do not assume they wouldn’t stoop to such a low. 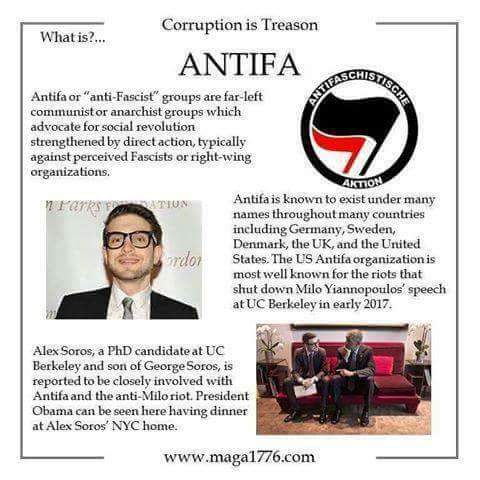 Who is funding Antifa has proven difficult. They are highly decentralized with loose affiliations with other groups. What we do know is that the Democrat Party and George Soros have used paid protest organizers and protesters in the past. We don’t believe the protesters are motivated by money, but rather their hatred of America. George Soros has an affiliation with Antifa through a group called The Alliance for Global Justice that supports Refuse Fascism, an Antifa group. Their goal is to “Drive out the Trump/Pence regime.”

There is no strong Fascist movement in America, but there is a strong Communist presence. Popular phrases such as social justice that Obama put into fashion are popular communist signals. The movement is now filled with every disenchanted dirt bag, with built-in Antifa Brown Shirts in attendance in case you’re not listening. This is no longer politics, but an attempt at a Communist/Socialist takeover of this country.

As we get closer to the 2020 election, and especially if the Democrats lose, I see cities like Portland, Oregon and a town near you descending into total chaos as the Left gets more aggressive in their attempt to be rid of Trump and the America we love.

If we do not get a handle on this problem soon, Western civilization will resemble a post-apocalyptic Mel Gibson movie.

What is Antifa trying to do? What is its mission?

Andy Ngo, one of the reporters who was beaten and put in the hospital by Antifa in Portland, says the mission is clear, but not much discussed. He says that the goal of Antifa is to drive America into a Civil War. Antifa should be declared as a terrorist organization.

Reporter Any Ngo: Antifa Believes It Is Pushing America Towards Civil War