The Net Neutrality Crack-Up — Capricious Tyranny, with no good in sight

The Internet is now under total government control. Who needs a Congress?  We’ve been drowning in Obama-made crisis. Here is one more.

ObamaCare for the Internet: It’s hard to see any good outcomes unless Congress gets strongly involved. Many are talking about this, but this report from Wall Street Journal comes up with just how weird, outrageous, and underhanded this one was.

The Epic question of the 12-year-old black kid, CJ Pearson, asking Obama “Do you really love America?” was locked by Facebook for “suspicious activity” after it had some 1.5 million views.  His excellent 3 minute video was gone from Allen West’s pages too, but it’s now back and this link still works too. Here it is on YouTube. Watch and share if you can. Good luck: Dangerous times for free speech. Dangerous times for truth.

At this writing the FCC rules were still secret. They have finally been released and have strong links to George Soros.  They were created  by unaccountable, non-transparent bureaucratic process and can be changed endlessly with the stroke of a pen.

Bottom line: If the FCC now says something — anything!!! — about the Internet is illegal, then it is. Unless Congress intervenes, the FCC will now be the judge and jury.

“The FCC created an unneeded controversy to address something that wasn’t broken and didn’t need fixing.”

DECLARATION OF INDEPENDENCE FOR THE INTERNET

“Governments of the Industrial World, you weary giants of flesh and steel, I come from Cyberspace, the new home of mind. On behalf of the future, I ask you of the past to leave us alone. You are not welcome among us. You have no sovereignty where we gather.”

How Obama blindsided his friends, among them Google, the NAACP and Jesse Jackson. 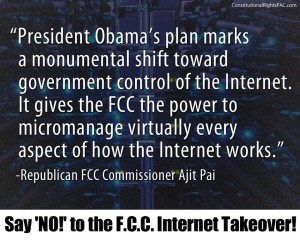 Generations of high-school students have chuckled over the line, in Henry George’s 19th century book “Progress and Poverty,” that “If a man build a ship we make him pay for his temerity, as though he had done an injury to the state; if a railroad be opened, down comes the tax-collector upon it, as though it were a public nuisance.”

That’s the cable industry, which invested to create the nation’s high-speed broadband platform and now is being punished for it. Cable invested when, for regulatory reasons, the phone companies wouldn’t. Now the Obama administration says we need strict regulation because there’s not enough competition for the fast broadband option that only a lightly regulated cable industry was willing to build.

To dispense with one justifying myth, utility regulation is being imposed under a false flag, to solve a net-neut problem that, as even the FCC has acknowledged, has long since vanished from the marketplace. This week James Dolan of Cablevision announced falling TV numbers and told investors, “Connectivity has surpassed video as the primary product for a company like ours.” By “connectivity,” he means giving Web customers access to whatever they want.

Here’s another truth: Most of the big tech names like Google , Apple, Facebook and Microsoft have kept quiet as net neutrality morphed into a Title II utility-regulation agenda because they didn’t want to be attacked by left-wing groups, and because they trusted Tom Wheeler and Mr. Obama not to screw up an Internet that was working well. They’ve been blindsided, if not cheated, by the Obama administration. Only Netflix among the biggies went a different way for its own peculiar and dishonorable reasons, somehow inveigling the FCC into treating interconnection and peering as a net-neutrality issue, which it previously wasn’t.

Which brings us to the pusillanimous Tom Wheeler. We don’t use the adjective lightly. 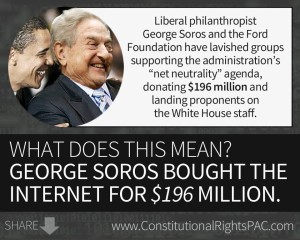 Barry sold out to Soros

Let’s be absolutely clear about something. The Federal Communications Commission chief did not go to President Obama and say, “We at the FCC have studied the issue and concluded that utility regulation is necessary to assure net neutrality.”

Nothing like this happened. Mr. Wheeler was still trying to head off utility regulation when Mr. Obama, after election day, suddenly announced his support for what previously had been an extreme regulatory agenda. In one of many ludicrous ironies, Mr. Wheeler had just successfully romanced a core of the Obama political coalition—including the Rev. Jesse Jackson —to oppose utility regulation of the Internet. In a little-noticed, bizarro-world circumstance, the NAACP, the National Urban League, Rev. Jackson’s Rainbow/PUSH and several other civil-rights groups are still rhetorically committed to fighting the White House on Title II.

Conspiracy theorists will have to put aside any idea that utility treatment was the secret objective of Mr. Obama and Mr. Wheeler from the get-go. Mr. Wheeler was blindsided too. It appears that Mr. Obama simply decided, after Democrats’ defeat in the midterm elections, that he would spend the last two years of his presidency catering to left-wing groups. If this had been a plan from the start, he and Mr. Wheeler never would have arranged events so as to portray the FCC chief as the White House’s quivering lap dog. Mr. Wheeler didn’t just flip-flop on utility regulation. He collapsed like a bag of air.

The FCC chief has been lying strenuously about all this for weeks, and perhaps may yet be rewarded with an ambassadorship or some other plum. But the original “Progressives” had higher aspirations when they created the idea of the independent regulatory agency. The FCC’s rule-making process is supposed to be deliberative and strictly defined by law (which is why its net-neut order will now be eminently appealable). It simply is not true that any FCC chairman in Mr. Wheeler’s position would have yielded to a policy diktat from the White House. An FCC chief with true “progressive” spine would have made it his top priority to protect his agency from improper political manipulation.

2 Responses to The Net Neutrality Crack-Up — Capricious Tyranny, with no good in sight