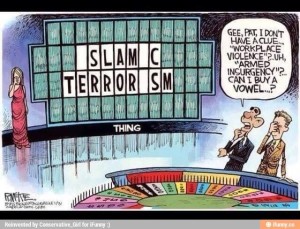 A funny thing happened on the way to the Socialist State. From Benghazi to Boston, and from Fort Hood to Chattanooga, Obama has been in denial about Islamic jihad, but on 12/02/2015 the largest domestic terrorist attack since 9/11 blew his cover.

The head of the FBI, defying Obama’s orders, officially declared the San Bernardino attack to be an act of terrorism. I was on-air in the area doing an interview for my novels during that attack, and I later wrote a newsletter about this.

We now have tens of thousands of Islamic terrorists in America, and more are coming. Our borders are porous, and political correctness impairs counterterrorism. Link.

Obama had a big problem. His seven-year stonewall of silence and lies to protect the image of Islam had been breached. What should he do?

Here’s what he didn’t do. He did not consult with security experts or Congress. He did not make any public statements about the existence of radical Islamic cells in America. He did not commit to a war to eliminate Islamic terrorism. He did not speak with our allies, to discuss why Muslim countries (Egypt, etc.) and even France are closing radical mosques, executing terrorists, and sealing their borders.

Instead, he had his Minister of Justice (Eric Holder in a skirt) issue threats to silence any who criticized Islam or warned of jihad. “See something, say something…. And be charged with a hate crime.” Official Obama policy is to silence criticism of Islam. Link.

Instead, he consulted with the Muslims — NOT with the 90% of Muslims who are not at war with us, but with the radicals, the 10% who are committed to jihad. Link.

Not long after the Islamic jihadist terror attacks in San Bernardino, California, and Paris, France, the Obama administration’s response has been to turn to radical Islamist groups, such as CAIR, who constantly criticize the FBI and other law-enforcement agencies, to the White House to discuss a religious discrimination, the Investigative Project on Terrorism (IPT) has reported.

President Obama’s weakness was presented in dealing with terrorism came after the San Bernardino attack in which Obama said, “If we’re to succeed in defeating terrorism we must enlist Muslim communities as some of our strongest allies, rather than push them away.”

Yet, Obama and his administration reached out to the radical Muslim organizations in the U.S. such as CAIR, Muslim Advocates, and Arab-American Institute (AAI) and ignored Muslim groups who advocate for liberty and freedom.

In response to the news that the White House turned to these radical organizations, Zuhdi Jasser, president of the American Islamic Forum for Democracy (AFID) stated, “Partnering with such organizations sends the wrong message to the American people. Neither I nor the AIFD, which advocates for liberty and freedom, through the separation of mosque and state, were invited to the White House meeting. Also shut out were my colleagues in the new Muslim Reform Movement, whose members ‘reject interpretations of Islam that call for any violence, social injustice and politicized Islam’ and stand ‘for secular governance, democracy and liberty.  Every individual has the right to publicly express criticism of Islam.  Ideas do not have rights. Human beings have rights.” 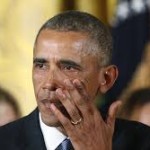 What was discussed in Obama’s meeting with jihadist groups? We do not know, but what we do know is that Obama has now committed the rest of his term to an all-out war on the 1st and 2nd Amendments, and that the White House has NOT issued any statements about destroying ISIS abroad or radical Islam in the United States. He has NOT changed course, he has doubled down.

Obama’s EOs to bypass the 2nd Amendment, were announced with a tearful, Hitler style, speech:

Here are links for Obama’s fake tears and lies:

“A violent felon (now he adds — or a child) can buy a gun over the internet with no background check, no questions asked.” — Barack Hussein Obama

Obama flat-out lied. This one puts his “You can keep your doctor” lie to shame.

Oh, in theory, I suppose an unwise felon could try to buy a gun on line. It’s easier and safer for him to get a stolen one, but he could. Unfortunately for him, it is a Federal Crime for a convicted felon to purchase or possess a gun, and the penalties increase if state lines are crossed. If Obama’s felon buys a gun off the Internet, the weapon is shipped to a local gun shop or dealer with a FFL (Federal Firearms License).

Said felon must then go to the dealer to pick up the weapon he has purchased. The felon  cannot acquire the gun until he passes the same background check that he would if he bought it from a gun shop in the first place.

America has tough federal gun laws that are fully supported by Congress and the NRA. Unfortunately, the Obama Administration refuses to enforce these laws. 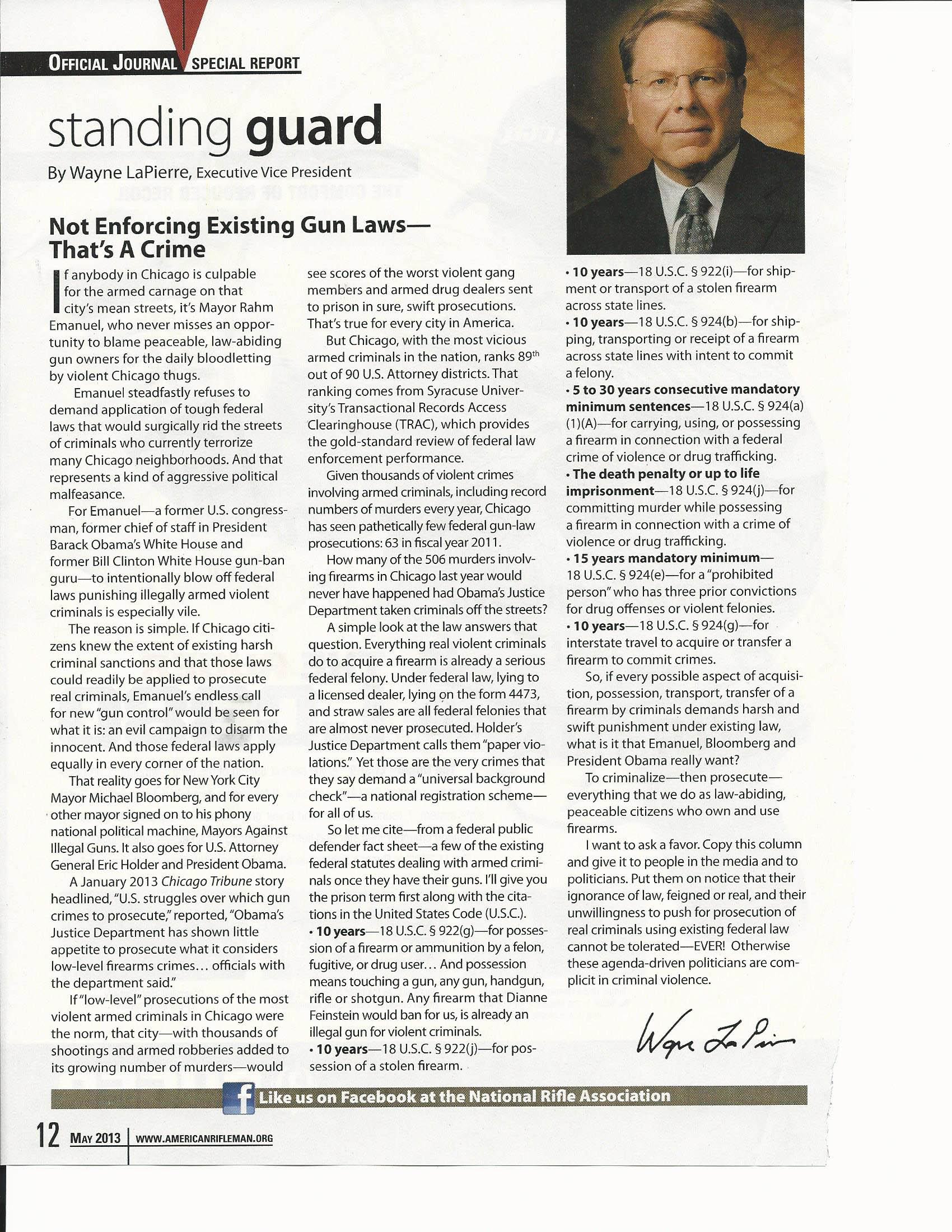 Instead, the Obama agenda is to deny guns to law-abiding Americans.  He doesn’t care about criminal gangs in the Democrat-run big cities having guns. The cities with the toughest gun laws have the most shootings, mostly Black on Black crime. The radical left apparently doesn’t care about these. Obama does not enforce the strict Federal Laws (see above) passed by Congress that govern felons and criminals with guns. 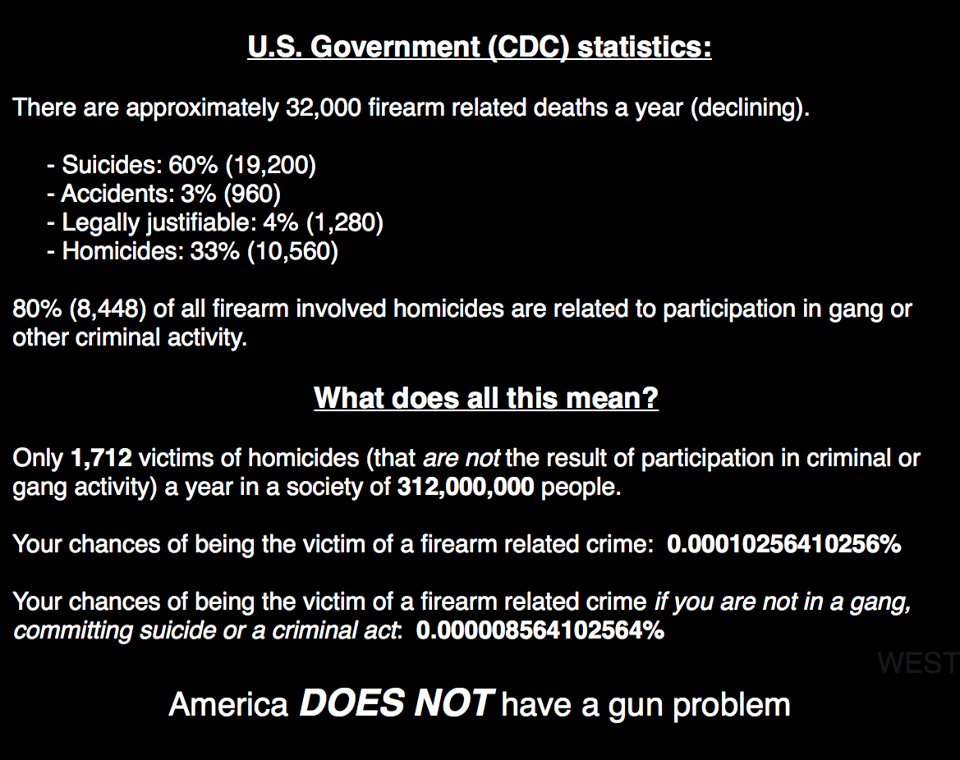 The Obama White House says 30,000 annual “gun deaths” per year. This is another Alinsky lie, 90% true but totally misleading. FACT: FBI says 8,124 homicides by gun, and all but 1,712 of these are the result of the victim’s participation in a crime or being in a gang. CDC cites 21,175 suicides by gun.

When people – including Democrats and some in the Obama media – voiced their concerns about his tyrannical policies regarding gun control (versus criminal control or terrorist control), Obama jumped the shark, delivering a rant about paranoid Americans clinging to their guns and religion. This video clip is originally from CNN, no less.

According to Obama, America got off to a bad start as a Nation by being paranoid about King George III, back in 1776. OMG.

What can we expect in 2016? More jihadist attacks focused on the mass murder of helpless, unarmed civilians. Local law enforcement and the military will  be targeted. We will also see a pattern of “random” crimes that appear demented, such as knife and automobile jihad. Black thugs, drug gangs, and illegals will participate. Leftist groups will demonstrate and riot.

The Federal reaction under Obama will not be against the thugs and jihadists. Instead, he will war against his political opponents, police, guns, and our First and Second amendments. The media will suppress criticism of Islam, illegals, and Black thugs.

“2016 will be the most significant year in our lifetimes.  It will finally decide, once and for all, what kind of country we want and will become.  Do we return to the principles that made the United States the greatest country on earth, or do we forsake the truth for a lie?  What kind of country will you leave to your children and grandchildren?”

1 Response to The Tearful Tyrant doubles down. Obama attacks the Constitution, ignores jihadists.