Trump should start declassifying after the FBI Strzok Stonewall 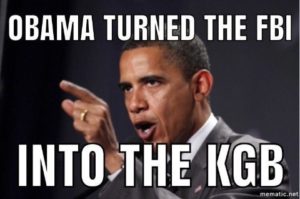 FBI agent Peter Strzok’s appearance before Congress Thursday was a predictable political circus, and here’s what we learned: President Trump will have to declassify a host of documents if he wants Americans to learn the truth about what happened in 2016.

Mr. Strzok was combative, and he pointed to an FBI lawyer in the room as reason not to disclose much of anything about his investigation into the Russia connections of the Trump campaign. Under pressure from Ohio’s Jim Jordan, Mr. Strzok did reveal that Justice Department official Bruce Ohr acted as a channel between the opposition-research firm Fusion GPS and the FBI in 2016. We already knew that Mr. Ohr’s wife Nellie worked for Fusion.

This means that Fusion, an outfit on the payroll of the Clinton campaign, had a messenger on the government payroll to deliver its anti-Trump documents to the FBI. This confirms that the FBI relied on politically motivated sources as part of its probe, even as Mr. Strzok insists he showed no political bias in his investigating decisions.

Yet if this is the most Congress could pry out of the FBI’s lead Russia investigator over 10 hours, legislative oversight won’t discover the truth. Mr. Trump will have to help Congress by ordering Justice and the FBI to declassify the relevant documents. Consistent with protecting legitimate sources and methods, here is the document list Mr. Trump should want released:

• The FISA applications. Justice and the FBI made one application and three renewals for warrants against former Trump campaign aide Carter Page. The text of those applications would show the degree to which the FBI relied on the dossier compiled by Christopher Steele at the request of Fusion GPS. They would also show how honest FBI and Justice were with the Foreign Intelligence Surveillance Court that approves warrants.

• Woods procedures documents. The FBI is required to vet and support the facts its presents to a FISA court when it seeks a warrant to eavesdrop on a U.S. citizen. These rules are known as Woods procedures, and releasing sections of this Woods file would show the extent to which the FBI verified the dossier or other evidence it used as its justification to listen to Trump campaign aides. More broadly, Mr. Trump should declassify any document that demonstrates what the FBI and Justice knew about the provenance and accuracy of the Fusion-Steele dossier.

• The 302s. These forms include information taken from the notes FBI agents make while interviewing a source or subject. Senate Judiciary Chairman Chuck Grassley last week asked Justice to declassify the 302s for 12 separate FBI interviews with Mr. Ohr concerning his contacts with Mr. Steele. Declassifying other 302s related to the subjects in this probe (including former Trump aides George Papadopoulos, Michael Flynn ) would reveal what the FBI was told, who provided what information, and how much came from politically motivated sources.

• The 1023s. These are the equivalent of 302s for counterintelligence, and they document FBI debriefings with informants or sources. Mr. Trump should declassify these and other documents showing interaction between the FBI and Mr. Steele, Fusion GPS founder Glenn Simpson, Fusion backer Dan Jones, informant Stefan Halper, or anyone the FBI used to keep tabs on the Trump campaign. These documents would reveal the extent and dates of the FBI investigation of the Trump campaign.

Mr. Trump is undoubtedly being told that declassifying these documents would set a bad precedent, or risk accusations that he is undermining special counsel Bob Mueller’s investigation. But the worst precedent would be letting mistrust and partisan suspicion persist over how law enforcement behaved during a presidential campaign.

Mr. Mueller’s probe is also moving ahead without interference, as his indictment Friday of a dozen Russian agents for hacking Democratic National Committee computers [under the Obama Administration, who issued a stand down order to not investigate at the time] shows. But indictments of Russians who will never see a U.S. courtroom don’t tell us anywhere near the complete story. That duty falls to Congress, not to a special counsel whose job is deciding whether or not to prosecute crimes.

Mr. Trump is going to be attacked no matter what he does. He should declassify these records or stop complaining about his Justice Department’s lack of cooperation.

The Editorial Board, Wall Street Journal

No one knows if Donald Trump is serious or trolling when he tweets, and an example is his Wednesday rant that his Attorney General should end the special counsel probe into ties between the Trump campaign and Russia in 2016. Assuming Mr. Trump is even remotely serious, it’s worth repeating why Democrats are yearning, aching, praying for him to fire Robert Mueller.

“This is a terrible situation and Attorney General Jeff Sessions should stop this Rigged Witch Hunt right now, before it continues to stain our country any further,” Mr. Trump tweeted Wednesday. “Bob Mueller is totally conflicted, and his 17 Angry Democrats that are doing his dirty work are a disgrace to USA!”

Mr. Sessions is likely to ignore Mr. Trump because he has recused himself from supervising Mr. Mueller. But let’s assume Mr. Trump does order Deputy AG Rod Rosenstein to shut down the Mueller probe. Mr. Rosenstein, who appointed Mr. Mueller, is likely to resign before he follows that order. Others in the Justice chain of command would do the same.

But even if Mr. Trump did find someone to fire Mr. Mueller, the practical effect on the Russia investigation might be negligible. The office of special counsel contains multiple prosecutors and FBI agents who have been collecting evidence and interviewing witnesses. Mr. Trump would have to fire them too, though they could still talk to the press and to Congress.

For that matter, what’s to stop a U.S. Attorney from picking up some of the Mueller evidence and moving ahead? Mr. Trump would be denounced far and wide, and he would have given voters reason to think he’s guilty, yet he might not even stop the investigation.

Mr. Trump would also pay an enormous, perhaps debilitating, political price. A dismissal of Mr. Mueller would be the dominant midterm election issue, swamping good news about the economy. Democrats would argue that a Democratic Congress is needed to rein in a rogue President, and swing-district Republicans would be hard-pressed to defend him. A Democratic wave would be that much more likely, and our guess is that Republicans would lose the House and Senate.

In that scenario, Mr. Trump’s impeachment by the House would be close to certain. Even without an official special-counsel report, the House could gin up its own investigative machinery, calling witnesses and collecting evidence already teed up by Mr. Mueller’s work to date. Conviction by two-thirds of the Senate might be unlikely, but that depends on what Democrats turn up. Mr. Trump might hope for a political backlash in 2020, but that usually sounds better in theory than it works in practice. Ask Al Gore about 2000 after eight years of Clinton scandals.

We can appreciate Mr. Trump’s frustration that what began as an FBI counterintelligence probe in 2016 has now stretched past two years. Mr. Mueller should also appreciate that he has a duty to the country to wrap this up sooner rather than later.

But the damage from firing Mr. Mueller is so predictable that’s it hard to believe even Mr. Trump would tempt such a fate—especially since there’s a smarter strategy. Start declassifying and releasing documents related to the FBI and Justice probes going back to 2016. We’ve laid out the list that would help the public understand what happened.

If Justice officials resign to protest such an order, they’ll be doing so in the name of secrecy. Mr. Trump will be acting in the interests of transparency. Meantime, Mr. Trump would avoid making every Democrat’s day by firing Mr. Mueller.