Thoughts on Pearl Harbor Day, America now and then….

December 7: Then And Now – Rearmament Versus Moral Disarmament

What’s really remarkable about December 7, 1941 isn’t that we got sucker-punched by the Empire of Japan but how rapidly we recovered and why. 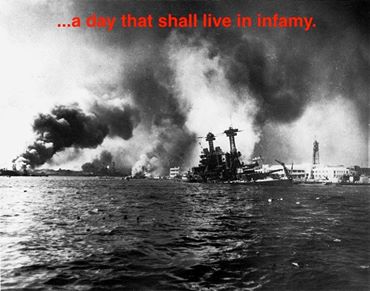 Coming out of the worst depression in our history (in 1940, unemployment was still 17%), we fought a global war on two fronts, against the world’s strongest military powers (fueled by fanaticism and plotting war for almost a decade) and won, becoming the dominant power on the planet in the process. And we did it all in three years and eight month after Pearl Harbor.

In 1940, the U.S. Army was ranked 18th in the world – not just behind Germany, France, Russia, Britain, Italy and Japan, but also inferior to that of Spain, Portugal, Sweden, Switzerland and the Netherlands. We could have beaten Liechtenstein – with one hand tied behind its back.

By the end of World War II, we had 16 million men in arms. Every month, thousands of aircraft, tanks and artillery pieces were rolling off assembly lines, as well as hundreds of thousands of weapons and millions of rounds of ammunition.

What accounts for our incredible recovery after the devastating blow at Pearl Harbor? How did we go on the win the Battle of Midway exactly six months later? Why did Americans rush to enlist? Newspaper headlines the day after the attack spoke of young men “flocking” to recruiting offices and the services “swamped” by applications to enlist.

What did we have then that we don’t have now?

Americans of today had their own Pearl Harbor twelve years ago – with almost the same number of dead (around 3,000). We responded by half-heartedly fighting futile wars which we announced in advance we didn’t intend to win. In 1942, did Douglas MacArthur set a timetable for withdrawal from the Pacific?

We have doggedly refused to identify the enemy (imagine Churchill announcing in 1940 that Nazism was an ideology of brotherhood and tolerance). Under Bush the Younger, we fought a war on terror while embracing its Middle Eastern roots. (Terror is a method anyway, not an ideology.) Even that’s been downgraded. Today we deal with “man-caused disasters” through “overseas contingency operations.”

In the meantime, we twice elected an anti-American who spits on our traditions, tramples the Constitution, apologizes for our greatness and facilitates our enemies’ rise to power. Obama is still smarting about the overthrow of the Muslim Brotherhood government in Egypt.

In 1941, Americans were a proud, confident and resilient people. We took responsibility for our actions. We looked out for each other. Church attendance was high. Kids actually learned in school.

In his book, “December 1941: 31 days That Changed America And Saved The World,” Craig Shirley wrote that in the 1940s “a high-school diploma was a hard-earned document and those young Americans who received a diploma had language skills, writing skills, citizenship skills, geology, biology, physics, Latin, Greek and an expansive list of books to read.”

In the early `80s John Silber, then president of Boston University, said a high-school diploma signified that someone had been “institutionalized” for 4 years, and nothing more.

Shirley also observed: “Chivalry and good manners reigned in American culture in 1941. Men held doors for ladies. Ladies acted like ladies. Men and women abided by the rules of courtship and life. It was the American way.”

Today, wherever you look, it’s decay. We’ve gone from rearmament in 1941 to moral disarmament as the current order of the day.

In November, a 14-year-old Danvers, Massachusetts student was indicted for the rape and murder of his math teacher, reportedly using a box cutter According to the Department of Education, in the 2009-2010 school-year, there were 1,183,700 violent crimes in America’s citadels of scholarship, including murders, rapes, robberies and aggravated assault (with and without a weapon).

According to one survey, in the 1940s, the top school discipline problems were: talking, chewing gum, making noise, running in the halls, getting out of turn in line (oh no! shocking), wearing improper clothing and not putting paper in wastepaper baskets. By the mid-80s, it was drug and alcohol abuse, suicide, rape, robbery and assault. Today the public-school perp-walk includes gangs, guns, sexting, drugs and all forms of violence.

More than 40% of all births in the land-of-the-free are out-of-the-wedlock. According to a 2010 Time magazine survey, 39% believe marriage is now obsolete. More than a third of Americans think marriage is outdated, but liberalism’s cause celebre is gay marriage.

In a nation that pioneered the protection of human rights, there are one to two abortions every minute. Thanks to a low birthrate – in part fueled by a failure to form families – we won’t have the manpower to fight future wars.

By age 15, 25% of American males and 26% of females have engaged in sexual intercourse. Each year, 19 million new cases of STDs are diagnosed, half among 15 to 26 year-olds. In the United States, pornography is a $12-billion-a-year industry.

Perhaps nothing symbolizes our descent more than the so-called knockout game, where black teens attack innocent bystanders (including the elderly) and try to knock them on the ground with one punch, while one of their cheering friends tapes the assault on a cell phone.  (JDT note: “If Obama had a son….” )

The differences between 1941 and 2013 are best illustrated by comparison:

* They had John Wayne, Jimmy Stewart and Henry Fonda. We have Matt Damon, Sean Penn and Jane Fonda.

* They had John Ford and Frank Capra. We have Oliver Stone and Michael Moore.

* They had swing. We have rap.

* They had Abbott and Costello and the Marx Brothers. We have Margaret Cho, Louis CK and Larry the Cable Guy.

* They had “Gone with The Wind,” “The Wizard of Oz,” “How Green Was My Valley” and “Abe Lincoln in Illinois.” We have “Texas Chainsaw Massacre” in 3-D, “Kick-Ass 2,” “The Last Exorcism,” “Nymphomaniac,” and “Abraham Lincoln: Vampire Hunter.”

* They had books. We have 60-inch plasma TVs, cell phones and social media.

* They had “Remember Pearl Harbor.” We have “Islam is the religion of peace.”

* They had “Praise the Lord and pass the ammunition,” “No atheists in the foxholes” and the Four Chaplains. We have the ACLU, Americans United for the Separation of Church and State and “America isn’t a Christian nation.”

* They had God, family and country. We have sensitivity, multiculturalism and inclusiveness.

* They had the 4th. of July, Thanksgiving and Christmas. We have Kwanzaa, Ramadan and Cinco de Mayo.

* They produced tons of consumer goods. We’ve outsourced production, while generating a mountain of debt – much of it owned by our enemies.

* They had Babe Ruth and Lou Gehrig. We have a 312-lb, 6’5′ offensive lineman who quit the Miami Dolphins because he was (poor baby!) harassed by a teammate, or so he says.

* They had Winston Churchill, FDR, MacArthur, Ike and Patton. We have Obama and his toadies on the Joint Chiefs of Staff.

But some things never change. They had a pathetic man waiving a meaningless piece of paper saying there will be “peace in our time,” with the savages of Germany. We have a pathetic man waiving a meaningless slip of paper telling us that he’s guaranteed the savages of Iran won’t have nuclear weapons – for the next six months, maybe.

Don Feder is a former Boston Herald writer who is now a political/communications consultant. He also maintains his own website, DonFeder.com.

The following story can be found on the GrassTopsUSA website at http://www.grasstopsusa.com/df120613.html.  Permission to reprint or quote this commentary on the Internet is granted provided you include a byline to Don Feder, attribution to GrassTopsUSA and link back to the article at the URL above.

Pearl Harbor — After the tours have gone: