President Trump delivered one of the best speeches of his Presidency Friday evening at Mount Rushmore, and for evidence consider the echo-chamber headlines above. The chorus of independent media voices understands that Mr. Trump is trying to rally the country in defense of traditional American principles that are now under radical and unprecedented assault.

Dark? In most respects Mr. Trump’s speech was a familiar Fourth of July ode to liberty and U.S. achievement that any President might have delivered in front of an American landmark. “No nation has done more to advance the human condition than the United States of America. And no people have done more to promote human progress than the citizens of our great nation,” he said.

Contrary to the media reporting, the America Mr. Trump described is one of genuine racial equality and diversity. He highlighted the central ideal of the Declaration of Independence that “all men are created equal.” As he rightly put it, “these immortal words set in motion the unstoppable march of freedom” that included the abolition of slavery more than a half century later.

Frederick Douglass and Martin Luther King Jr. also believed this to be true, and Mr. Trump cited them both, as he did other American notables black and white, historic and more recent. There was not a hint of racial division in his words except for those who want to distort their meaning for their own political purposes. In any other time this paean to American exceptionalism would have been unexceptional.

But this year even Mr. Trump’s speech backdrop, Mount Rushmore with its four presidential faces, is politically charged. Each of those Presidents—Washington, Jefferson, Lincoln, Theodore Roosevelt—is under assault for ancient sins against modern values, as progressives seek to expunge their statues and even their names from American life. Mr. Trump’s great offense against the culturally ascendant progressives was to defend these presidential legacies. 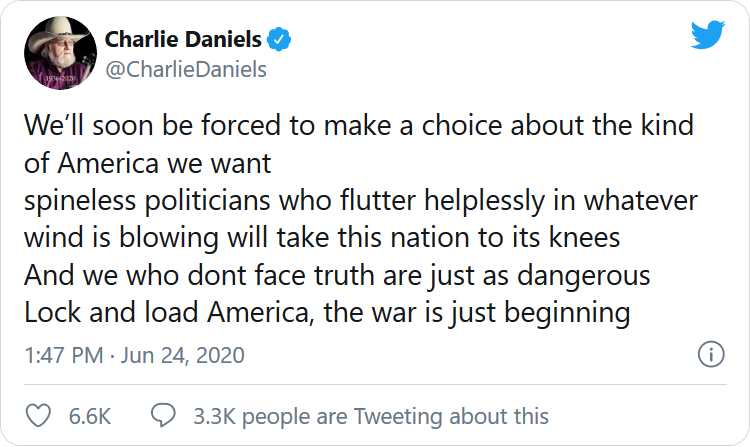 RIP Charlie Daniels — This was one of his last tweets

Divisive? Mr. Trump’s speech was certainly direct, in his typical style. But it was only divisive if you haven’t been paying attention to the divisions now being stoked on the political left across American institutions. Mr. Trump had the temerity to point out that the last few weeks have seen an explosion of “cancel culture—driving people from their jobs, shaming dissenters, and demanding total submission from anyone who disagrees.”

Describing this statement of fact as “divisive” proves his point. Newspaper editors are being fired over headlines and op-eds after millennial staff revolts. Boeing CEO David Calhoun last week welcomed the resignation of a communications executive for opposing—33 years ago when he was in the military—women in combat. The Washington Post ran an op-ed this weekend urging that the name of America’s first President be struck from Washington and Lee University.

Any one of these events would be remarkable, but together with literally thousands of others around the country they represent precisely what Mr. Trump describes—a left-wing cultural revolution against traditional American values of free speech and political tolerance. And he called for Americans not to cower but to oppose this assault:

“We must demand that our children are taught once again to see America as did Reverend Martin Luther King, when he said that the Founders had signed ‘a promissory note’ to every future generation. Dr. King saw that the mission of justice required us to fully embrace our founding ideals. . . . He called on his fellow citizens not to rip down their heritage, but to live up to their heritage.”

Contrast that with the New York Times’s 1619 project, which derides America’s founding in 1776 and replaces it with a history that distills the country into a slave-owning enterprise that remains racist to the core. Who is really stoking division and a culture war?

Mr. Trump is far from the ideal spokesman for this message given that he has often used the politics of division himself. But liberal elites have created this opening for him by failing to stand up against the radicals who are using the justified anger at the killing of George Floyd as a cudgel to hijack America’s liberal institutions and impose their intolerant political views on everyone else.

No doubt Mr. Trump hopes this theme can restart his election campaign, and for once he gave a speech that was about something more than himself. Stay on script, add a second-term agenda, and he might even have a chance. But whatever the result in November, Mr. Trump’s Mount Rushmore theme isn’t going away. Progressive elites are courting a backlash that will have more than one champion.