Here is a note that came to me a few weeks ago: 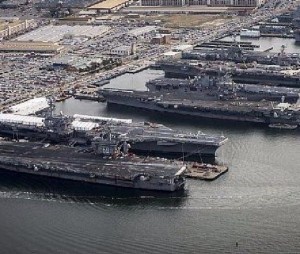 What is wrong with this picture?  The picture is of the five first-line US nuclear carriers docked together in one place. Just like Battleship Row, Pearl Harbor, on December 7, 1941.  This picture was taken February 2014 in Norfolk, Virginia.

The carriers were all pulled out from the MIDDLE EAST and the Afghanistan support role leaving our land forces naked and exposed!

I wondered why this happened. Was it a routine changing of the guard? Or what? I was afraid of the “what”!

I did some fact checking. Here is what I learned:

There are apparently 5 Nuclear carriers still moored in VA (one left, but returned), but only 4 are on active duty. They are there due to funding cuts, waiting repairs, overhauls, etc. Tally – at present it seems there are 5 Nuclear Carriers there, but only 4 of the 5 are active duty, and only one of the 4 is able to sail.

The 5th, the USS Enterprise (the world’s first Nuclear Carrier, and the first one to be decommissioned) is technically NOT active duty. Given the risk of regional or wider war, and with both Iran and Russia deploying combat units to our hemisphere, we may wish to reconsider that.

The Forrestal Class were contemporaries of the Enterprise, super carriers, but smaller and non-nuclear. The USS Forrestal (CV-59), formerly AVT-59 and CVA-59, is a super carrier that was named after former Secretary of the Navy James Forrestal and was the lead ship of her class of aircraft carriers. The other carriers of her class were the USS Saratoga, USS Ranger and USS Independence. All are now decommissioned.

In typical Obama fashion, there is no smoking gun that leads to him and proves treason. Obama has plausible denial, though the current situation is certainly caused by his massive cuts for the military. He can point fingers at Congress, shift blame, and spin endlessly.

The situation and having these ships all parked helpless in the same port does seem ripe for a major disaster, but what can be done about it is unclear. The Navy apparently cannot afford to operate or maintain these ships.

This soft target would seem to invite an enemy attack, just as at Pearl Harbor. But so does downsizing our military to pre-WW-II levels, the Arab Spring (which enables jihadists), a nuclear Iran, and a renewal of the Cold War. I believe our deployed fleet is the smallest it has been since WW-I.

Bottom line: Scary times. Dangerous policy. But not an impeachable offense. Benghazi, IRS, and others potentially are.

Then this WSJ article came out. OMG. Congress has mandated that we should keep eleven Carrier Attack groups ready, but we are now down to only THREE. This was done NOT by Obama Executive Order, but by spending legislation which Congress prepared and Obama signed into law.

Only 35% of the U.S. Navy’s entire fleet is deployed, fewer than 100 ships, including just three aircraft carriers.

Americans may be war-weary after Iraq and Afghanistan. But the world is still a hostile place, and the U.S. Navy is stretched too thin. And in a new sleight of hand, the Obama administration has changed what it considers a warship when reporting the size of the Navy’s “battle force.” From now on it will include the two hospital ships, Mercy and Comfort, 10 small coastal patrol vessels and a high-speed transport. Add those, subtract a few minesweepers, and voilà—the Navy fleet has grown to 293 from 283 ships.

Most of the new additions are lightly armed coastal-patrol craft and not true oceangoing ships. Originally designed to carry Navy SEALs and other special-operations forces, these 179-foot ships turned out to be inadequate for that role. Instead, armed with machine guns, they can be used to support “low intensity conflicts.” They were launched in the early 1990s and recalled in 2010 to deal with fatigue damage to their hulls. Their military role is questionable and they’re well past their expiration date, yet they sail on for public-relations purposes.

The Navy takes great pride in its humanitarian relief work, and its recruiting commercials feature photos of tsunami and earthquake survivors receiving food, water and medical care delivered by aircraft carriers, amphibious command ships, and of course, the two hospital ships. Such soft power diplomacy is an essential part of our foreign-policy strategy.

But substituting hospital ships, a former car ferry (which the Navy itself refers to as a noncombatant) and over-the-hill coastal craft for capital ships is delusional when calculating the battle force. So is the boast that the U.S. Navy has an 11 aircraft-carrier fleet. 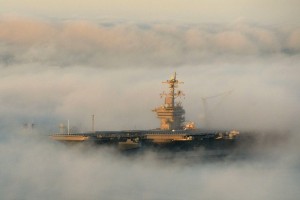 What has happened to America’s Navy?

Last month I was flown onto the USS Carl Vinson while its crew conducted training exercises about 150 miles off San Diego in the Pacific. Commissioned in 1982, the Vinson is one the Navy’s oldest nuclear-powered carriers. In a briefing before the flight to the carrier, I asked how many carriers the Navy had deployed world-wide that day, and how many it could deploy within 30 days. A Naval officer said three were deployed that day, and one more could get under way within a month—a far cry from the 11-carrier fleet mandated by Congress.

The Navy is supposed to be “forward-deployed” to provide the president with tools powerful enough to deal with potential threats and trouble spots. Syria’s civil war confounds us, Russia’s Crimean adventure keeps us awake at night, and Egypt’s revolution is only a little more settled than Libya’s. Consequently, the Pentagon is wisely keeping the carrier USS George H.W. Bush plus three guided-missile cruisers, six guided-missile destroyers and a frigate in the Mediterranean.

The rest of the world isn’t unpatrolled, but it is under-patrolled. Consider the so-called Asian pivot. Without carriers it is a meaningless phrase to those with territorial ambitions. North Korea’s nuclear program and missile tests continue. China’s aggressive posturing over the Senkaku Islands and other Japanese holdings in the East China Sea is matched by its development of a blue-water fleet. We have to hope that the Pacific will stay calm until 2015, when the U.S. is scheduled to send a carrier there.

The Navy’s role isn’t limited to carrier operations. Pirates still menace shipping and can be thwarted only by naval power. Piracy has been significantly reduced off Somalia, but a new threat has emerged off the coast of West Africa. In 2012, there were 86 pirate attacks in the Gulf of Guinea alone. And 126 more in that other favored hunting ground of pirates, Southeast Asia’s Strait of Malacca.

The ability to ensure that these sea lanes remain open and safe is far from clear. International coalitions can go a long way toward policing the seas, but coalitions require an American contribution. With the U.S. Navy arguably at its smallest since 1917, we don’t have many ships that are actually at sea. Only 35% of the Navy’s entire fleet is deployed, fewer than 100 ships.

Presidents facing international crises have long asked, “Where are the carriers?” Calling hospital ships warships may satisfy Washington bean counters but it won’t deter creative adversaries. Counting support and coastal vessels as capital ships that can project real power has serious consequences. America’s ability to join coalitions, lead them, or take independent action is compromised. No commander in chief should be deprived of these meaningful options—even if the president has little intention of using them.

Mr. Cohen, an attorney at KDLM in New York, is a former director of the U.S. Naval Institute.

Question: With the Navy so weakened, what is the status of our other strategic forces? During the Cold War, there was a Triad of Nuclear Deterrence that prevented war: The Navy, the Strategic Air Command, and our ICBMs. What is left of these?

Answer: I do not know. I pray this deterrence is still in place, but do not trust this Administration and have no confidence that Congress (both parties) is fulfilling its Constitutional Responsibility to provide checks and balances to keep us safe.

Obama’s Purge of the Military: It is as extensive as the purges of Stalin or Hitler. Click here.

Does the Muslim Brotherhood [ruled a terrorist organization by Egypt, who ARE Muslims] and CAIR have high level positions, clearances, and the right to be privy to and even approve or veto America’s National Security policies? They do. Click here.

What can be done to start addressing such issues? Click here for one idea.

Sign up for John's Mail lists
Free Newsletters and Action Notes
This entry was posted in Actionable, Military, Non-Fiction and tagged Dark Side, Educational. Bookmark the permalink.