A new REVIEW for Raven’s Run from leftist media 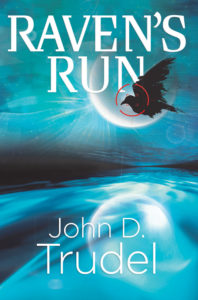 Trudel weaves together real and speculative elements in an alternate, secret history of the 20th century, detailing a decades-long battle for technological and ideological superiority. In the 1920s, aviator-turned-explorer Lt. George O. Noville goes on an expedition to Antarctica, with unexpected consequences. *

In (Trudel’s novel) a disgraced CIA operative is given a new identity as “Raven” and a new, covert mission: protect sexy, free-spirited Josie Lynch as she uses her psychic gifts to uncover secrets lost to history, starting with the truth behind Noville’s death in 1963.

As their investigation takes them across the world and through the years, they discover other secrets, such as who really killed President Kennedy, and attempt to thwart Iran’s development of a deadly new technology.

Once the duo settles into their mission, the narrative hits its stride and becomes a faster-paced, unapologetic adventure. However, Trudel still indulges in sections of exposition, courtesy of Lynch’s remarkably strong extrasensory perception.

Trudel’s story has a heavy right-wing slant, taking frequent jabs at President Obama. He also emphasizes that American public records can be abused by foreign intelligence operatives. Readers who share his views, however, are unlikely to complain. This adventure, first in a series, capably introduces its heroes and explores its take on the last century’s dark secrets.

* JDT note: Commander Noville, my uncle, and Admiral Byrd didn’t make it to Antarctica until after WWII. My novel did start with their transatlantic flight in 1927.