How to best prevent mass murder in Gun Free zones.

The old media does not report it, but law-abiding PRIVATE CITIZENS WITH GUNS are the first responders when help is needed. The only way to stop a bad guy with a gun is a good guy with a gun. Even if the police are there in minutes, it’s too late. All they can do is bag the bodies and put up the crime scene tape.

Again and again, this plays out, around the world, but especially in America, everyday heroes saving lives. This is why the 2nd Amendment has always been embedded in The Constitution and American Culture.

Our Republic is designed to be run by responsible, educated, informed, law-abiding citizens, who are self-reliant and NOT dependent on the government.  Out Founders designed it that way. As Ben Franklin said, “A Republic, if you can keep it….”

Obama’s “Transformational Change” agenda is diametrically opposed to this. He expressly does not like Americans “clinging to their guns and religion.” Ironically, while he wants law-abiding citizens disarmed, the Obama Administration refuses to enforce the tough federal laws against felons owing guns, and criminals using guns to commit crimes. While seeking to disarm honest Americans, the Obama Administration has repeatedly furnished weapons to Mexican Drug Cartels and paramilitary groups (“Fast and Furious”) and to jihadist groups in Libya, and, now, Syria. 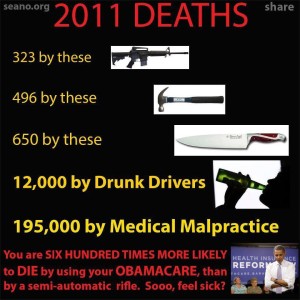 While bodies still there, a few blocks away President Obama gave a political speech attacking guns, promoting his gun-control agenda, but mostly bashing Republicans who want to cut funding for some of his programs.

Good guy with a gun saves a hundred. http://www.breitbart.com/Big-Peace/2013/09/24/Hero-With-A-Handgun-Saved-100-People-From-Islamists-In-Mall-Attack

An Ex-Royal Marine with a handgun saved 100 people as Islamists attacked the Kenyan Westgate Mall. According to the Daily Mail, the former Marine was having coffee with friends in Westgate Mall when the attack began. Armed only with his handgun, he immediately began gathering people and getting them out of the building.

One of his friends said, “He went back inside twelve times and saved 100 people. Imagine going back in when you knew what was going on inside.”

The hero with a handgun is a former Royal Marine who now lives in Kenya, but he cannot be identified for security reasons.

“A 22-year-old man from southeast Portland parked his car outside Macy’s, rushed into the Clackamas Town Center mall food court and opened fire, killing two people Tuesday, investigators said. Jacob Roberts’ AR-15 rifle then jammed, but he was able to get the gun working again. He shot and killed himself, sheriff’s deputies said. Steve Forsyth, of West Linn, and Cindy Yuille, of northeast Portland, were killed by Roberts, authorities said. A third shooting victim, Kristina Shevchenko, survived and is being treated at Oregon Health & Science University hospital.”

Just another Nut Case with a stolen weapon exploiting a gun free zone, and, in this case, only a few blocks from the largest police precinct station in Portland.

But wait, there is more: Here is what the NATIONAL NEWS did NOT report. A former mall guard, Nick Meli, was shopping with a friend and her young child when the shooter opened fire. He saw the shooter, drew and sited his Glock on the killer’s head, just as he was trained to do.

The shooter’s gun jammed. He was pounding on the charging level, looking into the eyes and down the gun barrel of an armed citizen. The citizen did NOT take his shot. Focused on his Front Site, he saw the blur of people moving behind the shooter.

What was the shooter thinking? We can only guess. He was a few ounces of pressure away from having his head blown off, and he probably knew it.

What we do know is the shooter disengaged and took off. He only fired one more round, into his own head, thus saving the police and the courts a lot of effort, and the taxpayers some money.

A happy ending, except for three victims and many traumatized shoppers. The young girl who was wounded was a student in her first week working at the Mall’s doughnut shop. She recovered from her physical wounds, but quit her jobs and was still having nightmares the last I heard.

What about the hero, Nick? He wanted no notice, and you will not see him mentioned in the National News. He might have gotten in trouble even though he hadn’t fired a round and had a Concealed Carry License, as this was a gun free zone. Read more here.

How do I remember this? We live here. My wife was out Christmas Shopping that day, and without her cell phone. Fortunately, she was not in that Mall.

We need more armed and aware citizens. America is destined to see more Mall Shootings unless our border policies and denial of terrorism changes. Boston and Fort Hood were not workplace violence.

These were terrorist attacks on American soil, and so might have been the DC Naval Yard shooting. Psychotics make excellent suicide bombers, both in the Mideast and all over the world. And it’s not about guns. Boston used pressure cookers, the first 9-11 terrorists used box cutters, and many of the gangs now terrorizing our large cities prefer to use clubs and knives. They have guns too, of course. The Mexican Cartels now run the drug trade, and a weapons instructor told me their paramilitary groups are better armed than our police are.

Some of the terrorists in Kenya were reported to be from America. Our borders are porous, and Federal Lands are sanctuaries for the Mexican Drug Cartels and paramilitary groups. See Jan Brewer’s famous speech standing by one of the signs Obama had posted in the desert, only 30 miles from Arizona’s capitol.

Here is an excellent article on Gun Control from a novelist colleague:

Sign up for John's Mail lists
Free Newsletters and Action Notes
This entry was posted in Non-Fiction, Self-Defense - Guns and tagged Educational, Heroes. Bookmark the permalink.