Hillary untrustable: The Watergate Committee fired her for lying.

There WAS a select committee that proved that Hillary Clinton was not to be trusted. It was called the “Watergate Committee,” it was run by Democrats, and they FIRED Hillary from the committee. 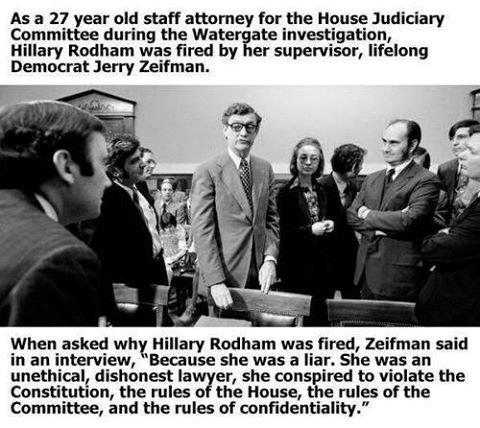 A massive propaganda campaign, cover-up, and stonewall regarding the Benghazi terrorist attack allowed Barack Hussein Obama to be elected by a small margin in 2012. Will this tactic also allow Hillary to replace him in 2016? The fact that Biden dropped out of the race is a clear signal that some in power think so.

Here is a friend of mine, John Kuzmanich, doing a local Oregon media interview with an honest reporter right after the Benghazi debacle. It gives some good insight into why the National Media refused to cover this terrorist attack.

John Kuzmanich — When asked, the reporter above admitted to all of us off camera, that her national affiliates tell them what they can and cannot cover. Kesley Card was an honest reporter, and at one point, she got a tear in her eye, as I truly believe she knew and recognized the truth, our concerns and sincerity in asking honest questions, and its political implications.

Benghazi and ‘Untrustable’ Hillary, by Brent Bozelle Kevin McCarthy was factually right — if grammatically and politically wrong — when he told Sean Hannity that the House’s Benghazi committee demonstrated Hillary Clinton was “untrustable.” The Clinton-pleasers in the media like NBC’s Andrea Mitchell almost glowed as they proclaimed McCarthy had offered a “political lifeline” to Clinton by admitting to a political agenda to get at her, using that tragedy. The Democrats have pushed heavily on the narrative that the House probe is transparently political — as if everything they say about Clinton is transparently … nonpartisan? So much of the Clinton spin from the media-Democrat complex simply repeats the scandal gamesmanship of the Clinton years, like a zombie doing the Macarena. Let’s recall all the old moves: 1. Lamenting the length of the investigation. ABC relayed “the House Select Committee on Benghazi has been active for 72 weeks — surpassing the Watergate Committee’s activity in the 1970s.” In part, that’s because Richard Nixon shortened the timeline by resigning. It’s also because the Clintons love dragging out the length of probes by lying and withholding evidence (see Lewinsky), and then shamelessly declaring it’s all “old news.” 2. Lamenting the cost of the investigation. What a poor use of taxpayers’ money!” they say. The lying and delays also add to the cost of investigations, just as they did during the Thompson hearings into the 1996 Clinton campaign’s alleged acceptance of illegal contributions from Chinese donors. Peter Jennings set the table then: “When we come back, two investigations of fundraising abuse, two of them on Capitol Hill. Is it a waste of time and money?” Is there anything more ludicrous than the manufacturers of a double-digit, trillion-dollar debt complaining about $4 million on congressional oversight? Judicial Watch reported the Obamas spent $7.7 million in flight expenses alone on their 2013 Christmas vacation. Did anyone in the media care? 3. Crying vast right-wing conspiracy. James Carville, the most obvious example of the ’90s spin zombie, went on MSNBC to say “this committee was nothing but a creation of Rupert Murdoch and the Koch brothers.” Apparently, Republican congressman Trey Gowdy is a tool of the “climate denial industry” that wants the Clintons ruined. Carville offered all the gravitas and finesse of people wandering through the park telling people the CIA listens to them through their dental fillings. But MSNBC still puts him on TV. 4. Predicting Republican overreach. A corollary of the conspiracy talk is the constant suggestion that the GOP will only damage itself by asking these nagging questions and is far too desperate to win elections by exploiting “phony” scandals at the expense of “substance” or the “real issues” of government policy. This creates a very strange impression that questioning government corruption or stonewalling is by definition not substantive or constructive. It’s always a “distraction” … at least when Democrats are in power. This was at the root of Democrats cheering as Bernie Sanders came to Clinton’s defense on being sick of the subject of her “damn emails.” We should be focusing on income inequality and climate change, not whether Hillary Clinton’s private email server is being hacked by the Russians and the Chinese. That concern would not be “substantive.” The one consistent media line on Benghazi is that exploring it was “political” immediately after it happened on Sept.11, 2012, and it’s still “political” to explore it in 2015 and 2016. As long as the Clintons stay active in politics, their scandals will continue, as will the damage control.”

There IS a witch, but Benghazi is NOT a witch hunt. Link. Link.